Brad is in Chelmsford. Soon, he’ll have a route named after him. It will be called the “Brad Wood Chignals Loop with Extra Part Anniversary Trail”. The distance is 16.01km and it is to be run in precisely 4:42minutes per kilometre. A divergence of more than 10% on this pace disqualifies one from having completed this Course and earning a badge on Strava. Ah Strava, it is our accepted means for allowing oneself to be under surveillance and tracking. Brad escaped from the Continent and went to the Small Island and has found comfort in disciplined and regular training while still working on an Antipodean time schedule. Us, back in Melbs, watch on in respect as the numbers pile up in his regular updates. 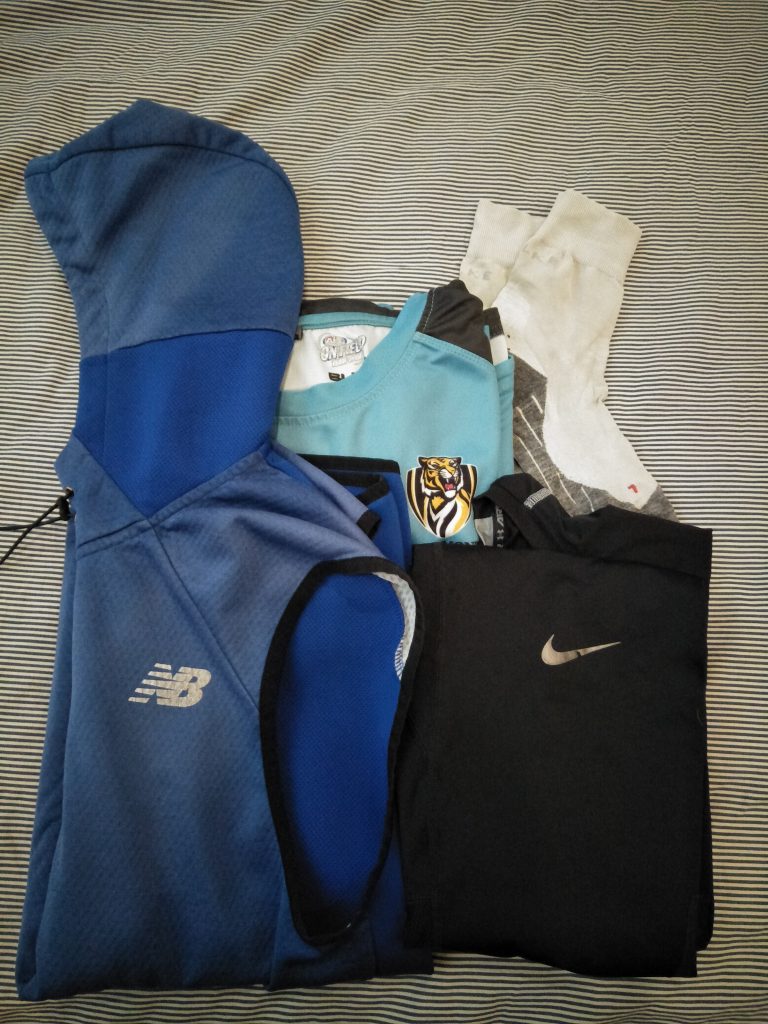 Strava provides the means for maintaining a sense of knowingness about our club-mates’ running. But running alone is not the same as running in a group. The groupness of running facilitates a pattern and regular routes and paces. Tuesday: Bush Reps, 10km circuit around the MCG/Birrarung Marr/St.Kilda Road/Yarra. Wednesday: High Boulevard, South Yarra or Casino Circuits. Friday: with Joji and Paul. Sunday: Lystie or Ferny. These routes are marked by the usual conversations. Joji asking questions, MJ quoting Simpsons, Tom waxing lyrical on his shoes and running rituals, Jonno summarising office dynamics and software, Ash being all calm, relaxed and extolling the virtues of a particular organic beer. Strava provides a mapped representation of one’s running trajectory without the textures and sounds. Running together regulates pace, where minor adjustments are made to include or exclude oneself from a conversation about cars, technology, sports. 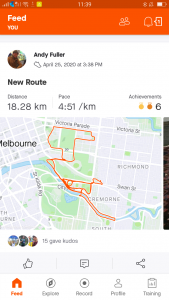 I’ve started drawing new routes since Lockdown. On Mondays: I run along Swan Street, going west, which then turns into Olympic Boulevard. I pass the Rectangular Stadium: it is barren. But, there is a soundscape of Melbourne Victory crowd noises. The old Olympic Park track is free of Collingwood players, whether M, W or Reserves. I turn left before the lights along the narrow track, still on the northern side of the River. A truck goes past carrying cattle off to slaughter. The stench is stronger than the fumes and remains after the truck has disappeared. I run behind the Rectangular Stadium and past the statue of Ferenc Puskas, legend of the World Game and minor hero of the NSL. I cross to the South of the River and go east. I then come back along the River, and with minor variations make sure I get up to about 16-17km.

The closure of gyms, tennis courts, squash courts, basketball courts, swimming pools condenses Melbourne’s exercisers onto footpaths, bicycle paths and the many urban green spaces. “Level 3 Restrictions are now in place. Go home.” “Help stop the spread of Covid-19. Maintain a distance of 1.5m.” Running reveals itself as a practical form of exercise. The little equipment and the only facilities needed are open space. The intensification of the use of footpaths requires an intensified negotiation of public space. But, our sense of personal space is fragile. Not only can the too-close presence of another human transgress our sense of space, we can imagine mere presence as being a threat to our physical health. The mass crowds of music festivals, footy games, are now imagined as cauldrons of germs, viruses, bacteria. The joyful exuberance of mass urban marathons has been replaced with the ‘loneliness of the long-distance runner’ who runs in a sparse and silent landscape getting through Covid Season one run at a time. 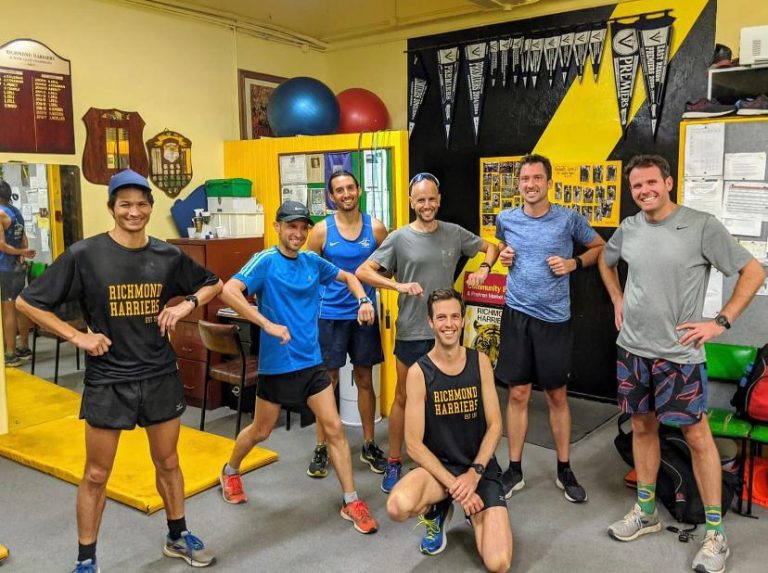 Those were the days

Member profile: Tia, “all the feels”

Well, it has been a while coming, but, welcome to Timotia Devi, aka Tia, as a Richmond Harrier member. Apart from a love for running, she also has superb music taste, unabashedly sharing that one Read more…

Tuesday nights in Summer are strictly reserved for Bush Reps. We do an 800m loop over near Kane’s Bridge in Studley Park. We jog over from the Club Rooms, cross the Walmer Street bridge and Read more…

MJ is not only one of the best runners of Richmond Harriers, he is also one of the most gregarious and positive members. MJ only has positive things to say about the Club, about other Read more…