NOTICE: DUE TO NOT REACHING THE DESIRED NUMBER OF ENTRIES WITHIN 10 DAYS OF THE EVENT, THIS YEARS EVENT IS BEING MOVED UNTIL SUMMER 2019. APOLOGIES FOR ANY INCONVENIENCE CAUSED

The Richmond Harriers are spicing things up winter this year, by holding a different kind of 5000m track race. It’s an elimination 5000m race!

How the race works

This is a game of tactics, surges, and close finishes. This is for for athletes and spectators alike.

There will be one elite 5000m mens and one elite 5000m womens event. The race organisers select elite entries based on recent form. The remaining races will be seeded according to recent results.

There is significant prize money offered by Advanced Freight Management to keep this interesting for both men and women winners. Only the elite mens and elite womens event has prizemoney. For each race, the top 10 get prizemoney as follows and is graded. You can see that for many in the elite race, each lap is worth fighting for!

Last year we had 3 different heats. It was a great night with exhilarating surges to avoid elimination and some classy racing between distance runners and middle distance athletes. The last ones standing on the night were Heidi See and Stewart McSweyn, both extremely versatile athletes. They each had to fight off strong competition to eliminate all other competitors right through till the last lap. 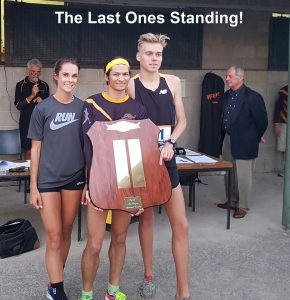